In Year 2 we will continue to learn about halves and quarters.  We will also begin to think about thirds. 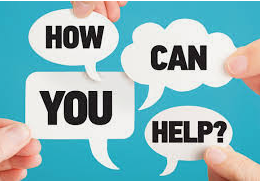 Try sharing objects equally to find fractions of amounts.  You could do this by using things around the house – for example, grapes, buttons, beads, or pieces of dried pasta… the options are endless!

If your child enjoys drawing and crafts, use paper, pens, and scissors to show them how fractions work.  Together, draw simple shapes like squares, triangles or circles.  You will need to ensure they are quite even and exact – drawing around things can help with this.

Cut out the shapes and then fold them to find halves, thirds, and quarters of the shapes.  Can the shape be folded into two, three, or four equal parts?  There are lots of ways you can use these shapes to explore fractions. For example:

Show your child a square and ask them how they would find half of the shape.  They may fold the shape in half to see if there are two equal parts.  Ask them to show you one half. What shape is the half?

Investigate how many different ways a shape can be folded in half.  For instance, you could fold a square diagonally to create triangular shapes.  Find different ways to make a quarter of a shape or a third of a shape.

Help your child start writing fractions using mathematical symbols.  The number at the bottom is called the denominator and the number at the top is called the numerator.  The denominator tells us how many equal parts we are dividing into.  The numerator tells us how many of the equal parts we are looking for.

You could play a game where children match the written fraction to an image of the fraction.  For example: 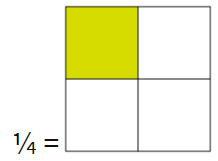 Fractions as numbers in their own right

Your child needs to understand that a fraction is also a number in its own right. You can help your child with this concept using number lines.

You could show your child a number line as shown below. Ask them to show where a half would go on the number line. Help them to understand that a half is directly in the middle of 0 and 1.

Similarly, your child will need to be able to find a quarter, three-quarters and a third on a number line, as shown below: 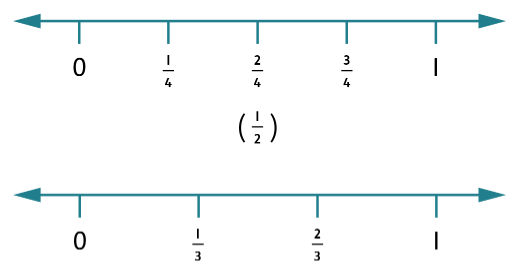 Encourage your child to begin counting in halves, quarters and thirds using objects and number lines to help. For example, cut pieces of fruit into three equal pieces and count in thirds: ⅓, ⅔, 1, 1 ⅓, 1 ⅔, and so on.

This will reinforce the idea that fractions are numbers, and will show how they can add up to more than one. Number lines and images can also represent fractions and help you count in thirds. For example: