We are working really hard to understand the value of numbers.  We are learning how to use lots of difference resources to represent numbers.

Showing numbers in interesting ways really helps your child to understand number and place value. Objects from around the home like buttons, dried pasta shapes, marbles, or pencils are great to practise counting and organising numbers. For example, ’32’ could be represented by 32 marbles arranged into three groups of ten and two ones.

As well as objects, your child can use drawings, diagrams, or symbols to represent numbers.  For example, you could draw 23 stick figures, then draw a circle around each group of ten, with three left outside of the circles. This shows that 23 is made from two tens and three ones. 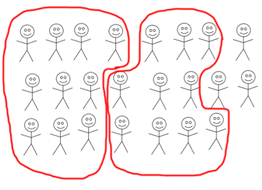 Try drawing alongside your child, and remember, wacky drawings are more likely to capture their imagination!

Your child will be expected to write numbers up to 100 using numerals and words. You could support their learning by playing a matching game.  Make two sets of simple cards or pieces of paper. On one set of cards, write numbers in numerals (for example, ’67’). On another set of cards, write the matching number names (for example, ‘sixty-seven’). Mix all the cards up and play snap.  Alternatively, you could place all the cards face down, and turn over the cards two at a time. If your child turns over two that match, they keep the cards. If they don’t match, they turn the cards back over again. This is a great memory exercise as well as a way to get to know numerals and number words.

Encourage your child to talk through how they know that one number is bigger or smaller than another: 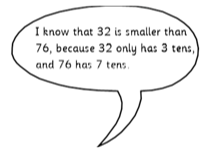 Partitioning means to split numbers into parts. Use practical resources, such as straws grouped in tens, to partition numbers in different ways. For example, the number 54 can be partitioned into 50 + 4, 40 + 14, 30 + 24, 20 + 34, or 10 + 44.  This will help your child to see patterns in numbers as they develop their calculation skills.